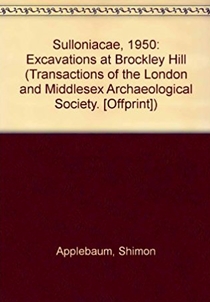 Roman pottery, also called Sulloniacis. It is known only from an entry in the 'Antonine Itinerary', (a listing of routes and facilities in the Roman Empire). There is some doubt as to the authenticity of the site. Evidence has been found of pottery production, but modern excavations have failed to produce any remains of mutationes (stations for changing horses) or mansiones (accommodation for official travellers).

This section lists the memorials where the subject on this page is commemorated:
Sulloniacae

This is an unusual plaque - painted on a large wooden board that looks like i...

Typographer.  Hagg Bridge has an interesting interview with Baines about his ...

Shakespeare scholar. Doctor of Law and Fellow of the Society of Antiquaries. ...