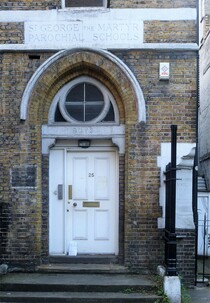 This school was housed in two nearby purpose-built buildings, both now listed, and both now thought to be private residential. The street was just ‘Gloucester Street’ until 1873.

24, Old Gloucester Road (east side), Listing
St George the Martyr Girls and Infants School. Built 1863-4, by S. S. Teulon, in an early Gothic style. The building is now marked as "Lundonia House" and has housed the October Gallery since 1979.

25, Old Gloucester Road (west side), Listing
St George the Martyr Boys School. Built 1877-8, by J. and S. Flint Clarkson in an early Gothic style comparable with No.24. Later rear extension. The stone above the front door arched fanlight reads "St. George the Martyr Parochial School", and that immediately above the door "Boys". Up on the roof you can see the fence which made a roof-top playground work.

We don't know when the schools closed.  Certainly after 1932 since Alamy have a photo captioned "The bIshop of London opened the new Hall of the St George the Martyr Schools, in Old Gloucester Road, London. Photo shows, the Bishop of London among the schoolboys after opening the new hall. 27 January 1932".

This section lists the memorials where the subject on this page is commemorated:
St George the Martyr School

The quotation is from the Bible, the Second Epistle of Paul to Timothy.

The quotation is from the Bible, Ephesians.

Public school. It's full name is The Royal College of St Peter in Westminster...