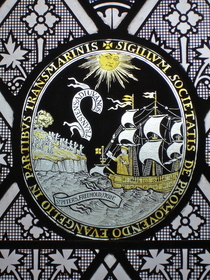 A Church of England missionary organisation (no surprise), created because the church was felt to be in a poor state in the American colonies. In 1965 it joined with the 'Universities' Mission to Central Africa' to become the 'United Society for the Propagation of the Gospel'. In 1968 The 'Cambridge Mission to Delhi' joined. 2012 renamed 'United Society' or 'Us'.

The Society's role in the Caribbean was not entirely as one might expect. Research at UCL into British slave-ownership has surprising information. James Heywood Markland was Treasurer to the Society at the time that slavery was abolished. In this capacity he was awarded compensation of £8,558 (about £755,000 today) for the 410 slaves that the Society owned on the Codrington estate in Barbados.

This section lists the memorials where the subject on this page is commemorated:
Society for the Propagation of the Gospel in Foreign Parts / United Society