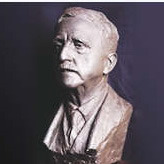 Sculptor. Born Bath. Soon after moving to London he introduced the hyphen i...

Born Derbyshire. His website has many photos of his work at Fulham Palace.