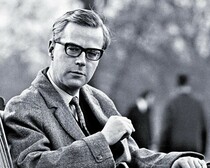 Robert Lucien Wade-Gery was born on 22 April 1929 at 41 Museum Road, Oxford, the only child of Henry Theodore Wade-Gery (1888-1972) and Vivian Wade-Gery née Whitfield (1897-1988). His father was Oxford University's Wykeham Professor of Ancient History. When he accompanied his parents on board the SS Alaunia of the Cunard White Star Line that departed Southampton, Hampshire, on 31 July 1937 bound for Montreal, Canada, they gave their home address as 131 Woodstock Road, Oxford.

Educated at Winchester he went on to New College, Oxford and gained a double First in Classics and Ancient History. He joined the Foreign Office in the economic relations department in 1951, the year he became a Fellow of All Souls. After his first assignment abroad, to Bonn, Germany, he became private secretary to the Foreign Office's Permanent Under-Secretary. A distinguished career that saw him serving both at home and in such places as Tel-Aviv, Israel; Saigon, South Vietnam; Madrid, Spain and Moscow, Russia, his final overseas appointment was as High Commissioner to India from 1982 to 1987. He was also the Chairman of the Governing Body at the School of Oriental and African Studies.

He died, aged 85 years, after having a stroke, on the 16 February 2015 in Gloucestershire.

This section lists the memorials created by the subject on this page:
Sir Robert Wade-Gery

German ambassador from 1932 to 1936. Well-liked by British politicians but hi...