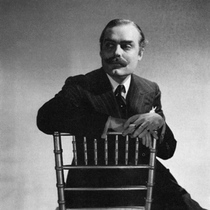 Cartoonist and writer. Son of Robert, grandson of Sir William, he was born at the Notting Hill house with the plaque. At Oxford University he became friends with Betjeman and after art school worked with him at the Architectural Review. Like Betjeman Lancaster dressed to impress, in a smart and old-fashioned style, which he maintained all his life.

In 1939 he became the cartoonist at the Daily Express where he introduced the idea of the topical 'pocket cartoon', which is still used today in some newspapers. Always interested in architecture, after the war he published some books of cartoons on the subject, often affectionately lampooning his own milieu, the upper classes. Also involved in designs for the stage and for the Festival of Britain. A member of the GLC's Historic Buildings Board. Died in Chelsea.

This section lists the memorials where the subject on this page is commemorated:
Sir Osbert Lancaster

Cartographic publisher. He set up as a publisher with Frederick Tallis in Cri...

Painter.  Born Rome.  A late-comer to the Pre-Raphaelite style, his subject m...