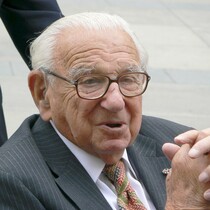 Sir Nicholas George Winton MBE was a British banker and humanitarian who established an organisation to rescue children at risk from Nazi Germany. Born to German-Jewish parents who had emigrated to Britain at the beginning of the 20th century, Winton supervised the rescue of 669 children, most of them Jewish, from Czechoslovakia on the eve of WW2. Winton found homes for the children and arranged for their safe passage to Britain. This operation was later known as the Czech Kindertransport (German for "children's transport").

Born in Hampstead as Nicholas George Wertheim. His parents were German Jews who had moved to London two years earlier. They changed the family name to Winton and converted to Christianity. In 1938-9 he became involved, with others, in the work to get Jewish children out of Europe before the war began. Only Britain and Sweden agreed to take children. America was asked but failed to take any.

His rescue work was unknown until 1983 when he became a national hero and was honoured. Died, aged 106, in Slough.

This section lists the memorials created by the subject on this page:
Sir Nicholas Winton