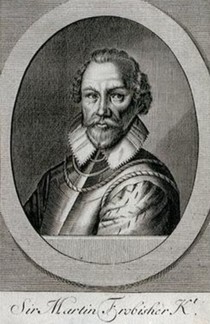 Privateer, explorer, and naval commander. Born Normanton, Yorkshire, birth date approximate. Aged 15 sent to London to learn a trade at his uncle's, who was a merchant adventurer. Frobisher explored the area between Canada and Greenland where there is now a bay named after him. Hoping to find gold and/or a North-West Passage (to the trading nations of Asia), Elizabeth I helped to fund two more voyages to that area. He went on to sail with Sir Francis Drake, helping to fend off the Spanish Armada, and with Sir Walter Raleigh. Wounded fighting the Spanish off the coast near Brest, he died in Plymouth.

This section lists the memorials where the subject on this page is commemorated:
Sir Martin Frobisher

This tablet is in memory of Sir Hugh Willoughby, Stephen Borough, William Bor...