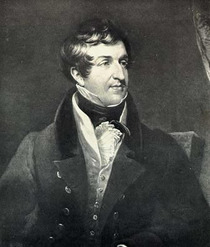 Born near Bristol. Toured Europe with Lord Byron but then entered politics.

Created Baron Broughton 1851. Member of Parliament for Westminster from 1820 to 1833, for Nottingham from 1834 to 1847 & for Harwich from 1848 to 1851. He held several important offices of state, including those of Secretary of State for War and Chief Secretary for Ireland. In 1824 Sir John spoke at the first dinner of the Society of British Artists. He was appointed First Commissioner of Woods & Forests (the then title of the First Crown Estate Commissioner) in 1834.

Is buried at Kensal Green Cemetery.

This section lists the memorials where the subject on this page is commemorated:
Sir John Cam Hobhouse, Bt. PC, GCB

British Prime Minister. Born Kingston, New Brunswick, (which at that time was...