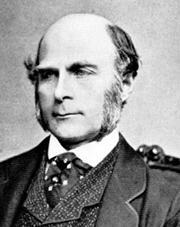 Biostatistician, human geneticist and eugenicist. Born at The Larches, Sparkbrook, Birmingham, a half-cousin of Charles Darwin. An enthusiastic traveller, particularly in Africa. Darwin's publication of 'The Origin of Species' caused him to become immersed in the study of heredity. He invented the term 'eugenics' (the science of creating superior offspring), and refined the system of identifying fingerprints. Knighted in 1909, he died at Grayshott House, Haslemere, Surrey.

2020: University College London announced that it would remove the Galton name from its buildings. "Victorian scientist Francis Galton coined the term eugenics and endowed UCL with his personal collection and archive along with a bequest for the country’s first professorial Chair of Eugenics."

2022: In the Guardian's 12 February review of Adam Rutherford's book "Control" Rutherford is quoted: "Galton's racism was deep and robust".

This section lists the memorials where the subject on this page is commemorated:
Sir Francis Galton