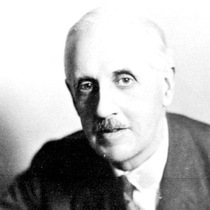 Founder of the Imperial War Graves Commission. Born Bristol. Became a teacher, moved into education management and worked in the Transvaal. Back in Britain he edited a newspaper.

In WW1, too old for the army, he served in the ambulance service of the Red Cross. In this job he saw the need for a formal, organised, method of marking and recording graves. He set up and ran the Graves Registration Commission, and after the war he created the Imperial War Graves Commission, acting as the Vice-Chair until 1948. Died at home in Gloucestershire. In 1960 the IWGC was renamed the Commonwealth War Graves Commission.

This section lists the memorials where the subject on this page is commemorated:
Sir Fabian Ware

Born Homerton. Classical and literary scholar. Although he worked in his co...

A society set up to provide a forum to bring together all those with an inter...