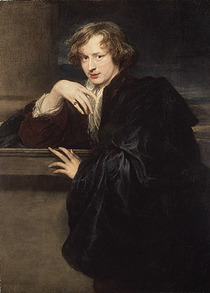 Grew up in Antwerp and was trained by Rubens. Visited London in 1620 for a few months to do a history painting for George Villiers and a portrait for the Earl of Arundel. He then worked in many of the leading courts of Europe and in 1632, at the invitation of Charles I returned to England where he spent less than 10 years with over a year's return to Antwerp in the middle. Here he was knighted, given a pension and installed in a house in Blackfriars with a jetty for the royal barge when the King visited his studio. Van Dyck was well dressed with courtly manners. His portraits flattered the sitters. He liked to paint the women in informal dress, flowing drapery and the arms sexily on display. A century after his death the fashion for loose shifts for women and plain satin suits for men was known as Vandyck dress. During his stay in London Charles fell out with Parliament and ruled supreme, giving the court a false impression of its power and resilience. Regicide and Civil War were soon to come. The period has been compared to England in the years before WWI, an innocent, golden period before the horror.

This section lists the memorials where the subject on this page is commemorated:
Sir Anthony Van Dyck

History painter.  Born Paris but brought up in England.  Director of the Nati...