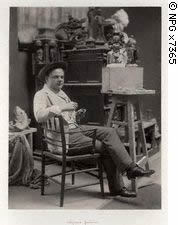 Woodcarver.  Some people succeed in their battle against nominative determini...