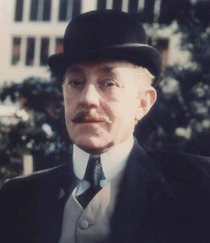 Credit for this entry to:
Alan Patient

Actor. Born at 155 Lauderdale Mansions South, Lauderdale Road, Maida Vale, as Alec Guinness de Cuffe. He first came to prominence in the Ealing comedy films, particularly 'The Ladykillers' and 'Kind Hearts and Coronets' in which he played nine characters. In 1957 he starred in 'The Bridge on the River Kwai' for which he won an Oscar. His many stage appearances included two plays by Alan Bennett, 'Habeas Corpus' and 'The Old Country'. On television he played George Smiley in the adaptations of John le Carré's 'Tinker, Tailor, Soldier, Spy' and 'Smiley's People'. In the 1970s, however he achieved international fame after he reluctantly accepted the role of Obi-Wan Kenobi in the first 'Star Wars' film. It was not a role he was proud of and said that he 'shrivelled up' every time Star Wars was mentioned to him. He however went on to appear in the next two films of the trilogy, which kept him financially comfortable for the rest of his life. Died in Midhurst, West Sussex.

This section lists the memorials where the subject on this page is commemorated:
Sir Alec Guinness

Commemorating the centenary of cinema 1996. Sir Alec Guinness in recognition...

Musician and actor. Born Thomas William Hicks in Bermondsey. He was promoted ...