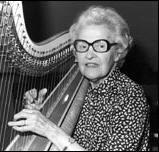 Harpist, known as Annie. Born at 78 Seaview Road, Liscard, Cheshire. Daughter of Eugene Goossens.  Her career began in London theatres and at the age of 16, she joined the London Symphony Orchestra as the only female musician. She was a founder member of the BBC Symphony Orchestra, becoming the first harpist to be broadcast on both radio and television. Recommended for a damehood, she was supposedly vetoed by Margaret Thatcher. Died at her home, Woodstock Farm, Gadbrook Road, Betchworth.

This section lists the memorials where the subject on this page is commemorated:
Sidonie Goossens

A year-long series of events organised by the Samuel Coleridge-Taylor Foundat...

Former nightclub.  It claimed to have been the first British club to have suc...