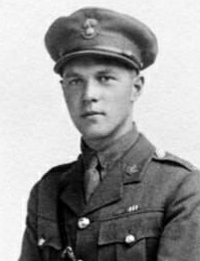 Soldier. He enlisted in the East Surrey Regiment in August 1915 at the age of twelve, and fought in the Battle of the Somme in 1916, then aged thirteen. In the 106th Machine Gun Company of the Machine Gun Corps he fought in the Battle of Delville Wood which saw some of the worst casualties on the Somme. He was sent home after his mother sent his birth certificate to the War Office and demanded his return. He re-enlisted in 1918 and served with the army of occupation in Austria. He joined the police in Kingston upon Thames after the war and served in bomb disposal in World War II.

Our colleague Andrew Behan has added some more information about this man. It varies somewhat with the above that has been taken from Wikipedia. Kingston upon Thames was within the Metropolitan Police District and contemporaneous records show that he was a police officer in the Surrey Constabulary both before and after World War II.

Sidney George Lewis was born on 24 March 1903, the sixth of the seven children of Edward John Mullion Lewis (1861-1949) and Fanny Lewis née Russell (1865-1942). He was baptised on 24 May 1903 at Holy Trinity Church, Upper Tooting and the baptismal register shows that his father was an asylum attendant with the family living at 53 Defoe Road, Tooting.

On 1 March 1928 he married Ivy Lillian Bardell (1907-1959) at the Parish Church, Tooting. The marriage register gives his occupation as a police constable and confirms that his address remained as 53 Defoe Road, Tooting. They had one son, Colin S. Lewis, whose birth was recorded in the third quarter of 1933 in the Chertsey, Surrey, registration district. Electoral registers from 1931 to 1935 show him and his wife listed at 51 Clarence Street, Egham, Surrey and in 1936 they were registered to vote by residing at 12 Grange Road, Egham. The registers for 1937 and 1938 show them both at 2 Police Cottage, Rosebery Crescent, Woking, Surrey and for 1939  at 7 Rosebery Crescent , Woking, Surrey. The 1939 England and Wales Register confirms him and his wife, who for some unknown reason is recorded as Joy L. Lewis, at 7 Rosebery Crescent, Woking, and it gives his occupation as a police constable, No.216, Surrey Constabulary.

After he retired from the police force he ran the George Hotel at Frant, Sussex, where his wife died on 21 February 1959. When he was granted probate on 8 April 1959 her estate totalled £920-12s-2d. In 1960 he married Maude L. Pett, but she had predeceased him when he died, aged 66 years, on 9 April 1969. Probate records show his address to have been 29 Amberstone View, Hailsham, Sussex and that when probate was granted on 5 June 1969 his effects totalled £1,796.

This section lists the memorials where the subject on this page is commemorated:
Sidney Lewis

The reports of the fund-raising campaign for this plaque named "historian Geo...

The station is nearby, in West End Lane, close to West End Green.