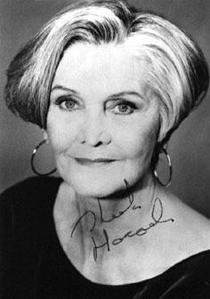 Actor, often in comedy roles. Born in Blackgang, Isle of Wight, she was the younger daughter of Enrico Cameron Hancock (1893-1970) and Ivy Louise Hancock née Woodward (1898-1970).Her father was a publican.

She was appointed as an Officer of the Order of the British Empire (OBE) in the 1974 Queen's Birthday Honours List.

In 2011 she was made a Commander of the Order of the British Empire (CBE), for services to drama.

In the 2021 New Year Honours List she was made a Dame Commander of the Order of the British Empire (DBE) for services to drama and charity.

This section lists the memorials created by the subject on this page:
Sheila Hancock

Peter Cook said this was modelled on "those wonderful Berlin cabarets which d...