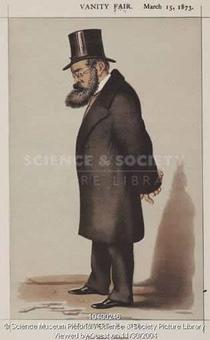 Born Bristol. "The sailors' friend", whose Load Line prevented ships becoming dangerously overloaded.  Sand shoes were renamed for him since the lower section is rubber and the upper is canvas: dry below the line, wet above.  And, neatly, he supported John Lubbock's legislation for Bank Holidays, which enabled people to go to beaches for which their Plimsolls were designed.

The LT logo resembles the symbol used on ships for the Plimsoll Line, or Load Line.  No coincidence - LT were happy to benefit from the safe transport associations of the Plimsoll symbol.

If you want to show your admiration for the man then celebrate Plimsoll Day, 10 February every year, by wearing Plimsolls and giving £1 to RNLI - Lifeboats.

This section lists the memorials where the subject on this page is commemorated:
Samuel Plimsoll

Educationalist and writer. Born Cincinnati, Ohio. She came to Britain in 1948...

Grandson of the first Duke.  Inherited the title and estates when his childle...