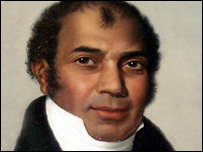 A Bengali Muslim, he joined the East India Company aged 11, where he served as a solder and fought a few times. Resigned in 1782 and two years later with his friend from the army Captain Godfrey Evan Baker, travelled to Ireland where he published 'The Travels of Dean Mahomet' and married a Protestant Irish girl and converted. They came to London where he introduced a therapeutic massage, or champi ('shampoo') which became all the rage.

In 1810 he opened the Hindoostane Coffee House, serving Indian-style food; we are unclear whether it served any actual coffee. It seems not to have been a success since he was declared bankrupt in 1812. The food served was a hybrid of Indian and British food and perhaps it did not appeal to either nationality. Things have changed: it's often said that the food served in modern-day Indian restaurants in the UK is not real Indian food but an Anglicised version which is certainly very popular. Mahomed moved to Brighton where he reverted to his successful champi and treated, among others, George IV and William IV, and where he later died.

From Daily JSOR we can add: "Sake Dean Mahomet (Sheikh Din Muhammad) was born in Patna, in what is now the Indian state of Bihar, in 1759. At age eleven, he joined the service of an Anglo-Irish officer in the army of the British East India Company, campaigning in Bengal. In 1787, Mahomet accompanied the officer back to Ireland. .... Mahomet lived in Cork for twenty years. He and his family moved to London in 1807.... His only other publication was an 1822 tract—on the benefits of shampooing."

This section lists the memorials created by the subject on this page:
Sake Dean Mahomed

Sir Alexander Fleming was a loyal regular. Legend says that it was mould spor...