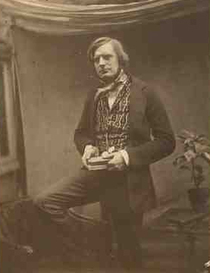 Photographer. Born in Heywood, near Rochdale, Lancashire. Trained and worked in law. In 1853 the Photographic Society of London was founded, with Fenton as its Honorary (unpaid) Secretary. In 1855 went to the Crimea War to take photographs. Died at home in Potter's Bar.

2017: Our friend and colleague, Ruth Richardson, has been researching Florence Nightingale as part of the campaign to save the Nightingale wards at the old Cleveland Street Hospital. Her researches have spilled over into the Crimea War and she has very kinldy provided the following text for Fenton:

Roger Fenton is the most famous of the photographers of the Crimea War. He went out at the request of Prince Albert, and was there for several months during the spring and summer of 1855. He was a landscape painter before he became a photographer, so he had a trained eye, and was an early figure in what became the Royal Photographic Society. He was alert to telling details, and the use of stillness and shadow. In the Crimea, he avoided anything upsetting, though we know from his letters home that he saw plenty. He preferred to work obliquely, as in his fine photograph of 'the Valley of the Shadow of Death', littered with spent cannonballs, The difficulties of carting cumbersome photographic equipment about the rugged terrain and of finding light-proof premises for developing his photographs from glass plate negatives were eventually overcome, and he became adept at creating makeshift studios. After sailing back with his glass negatives under difficulty, his extraordinary vistas and portraits were exhibited in London later that same year. The work involved in the taking and making of this exhibition was prodigious. Fenton also produced some of the most ravishing still life photographs from his Primrose Hill studio. A magnificent photographer who well deserves his blue plaque.

This section lists the memorials where the subject on this page is commemorated:
Roger Fenton

Photographer. Born Munich. Co-founded the London Salon of Photography in ...