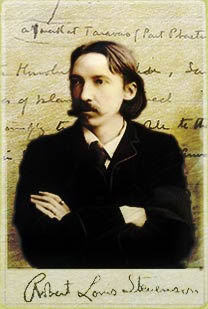 Born Edinburgh's New Town. Never a well man, he tried living in various places looking for a climate that would suit: Bournemouth, France, New York State. He died on a small Samoan island in the Pacific while opening a bottle of wine. The effort caused a blood vessel to burst. He and Henry James admired each others work and exchanged support and criticisms.
Some of his work: Treasure Island, Kidnapped, The Strange Case of Dr. Jekyll and Mr. Hyde, A Child's Garden of Verses.

This section lists the memorials where the subject on this page is commemorated:
Robert Louis Stevenson

Rape of the Lock