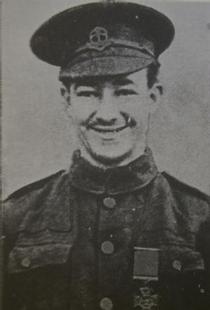 In 2009 we were contacted by Alexander Ferguson Moran (Fergus), saying his granddaughter’s husband’s great grandfather was Robert Ryder, VC. Fergus could not easily get to London to investigate the family story about the Middlesex monument and he was delighted when we visited on his behalf and sent him photos. In return he provided the photo and all the data about Robert Ryder, VC.

Ryder was born Harefield, London.  Awarded the VC for his action in France at Thiepval on 26 September 1916.  He dashed forward absolutely alone at the enemy’s trench and cleared it by skilful use of his Lewis gun, turning possible failure into success.  Another VC was won on the same day by another man from the Middlesex, Private F. J. Edwards. The two men became firm friends.  Ryder was promoted to Sergeant, and served also in WW2  Died at Hucknall , Nottinghamshire, and is buried in St.Mary the Virgin Churchyard, Harefield.

Note: we know of three other soldiers who also did some modelling - see Dudley.

This section lists the memorials where the subject on this page is commemorated:
Robert Edward Ryder, VC

This section lists the memorials created by the subject on this page:
Robert Edward Ryder, VC