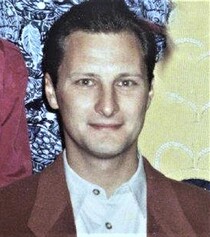 Robert Douglas Eaton was born on 12 January 1964 in Ditchling, Sussex, the youngest of the four children of Douglas R. Eaton and Laura T. A. Eaton née Morrow. His elder sisters were Judith A. Eaton b.1955, Angela L. Eaton b.1958 and Barbara J. Eaton b.1962.

Educated at Brighton College he was also a chorister at St Paul's Cathedral from 1973 to 1977 and in 2004 a plaque was provided in his memory in the crypt directly outside the doors to the Choir Practice Room.

In 1993 he married his American wife, Jacqui, and they lived in Manhasset, Long Island, New York, USA. He was the vice president for sales and for eSpeed at the stockbroking company of Cantor Fitzgerald.

A keen football player and supporter of Brighton and Hove Albion Football Club, a memorial fund was set up in his memory.

This section lists the memorials where the subject on this page is commemorated:
Robert Douglas Eaton

His obituary in the BMJ includes a poem in Latin. For more information about ...