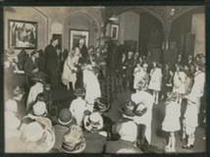 Inspired by East End schemes such as Toynbee Hall, this Settlement was established by Francis Herbert Stead (1857 – 1928, brother of W. T. Stead).  Francis was Congregationalist minister at York Street Chapel, and was Warden at the Settlement from its origin until 1921.  More information about Stead.

The 1790 York Street Chapel was where Robert Browning had been christened in 1812 and worshiped as a child (a “memorial tablet” on the wall used to mark the spot where he sat {similar to Michael Faraday}). The chapel was renamed Browning Hall in 1890 and the photo at Walworth History Tour by Darren Lock and Mark Baxter shows it with this name on the frieze. It was on the south side of what is now Browning Street (renamed 1937), to the west of Morecambe Street. The chapel was demolished in 1978 and replaced with the Ben Ezra Court housing estate.

In 2021 John Larson who used to live nearby wrote to say that "the hall was being used as storage and one Saturday caught fire, by the time the fire was out, the building was badly damaged and was left boarded up for some years. Behind the hall was a bomb site and the new housing estate had not been started when I left in early 1979."

The Settlement was closely associated with the chapel.  From British History On-line “During the second half of the 19th century social work based on the chapel did much to alleviate distress in Walworth. The Browning settlement was publicly inaugurated in November, 1895, by an address given in Browning Hall by Herbert Asquith…”.

In 1901 the Settlement was incorporated and in 1902 it established itself, initially as the ‘Browning Club’, in the building on Walworth Road (purpose-built, we think) from where it provided services to the poor.  In Bibliography of College, Social, University and Church Settlements we find this quote: “For loftiness of ideal, for the successful promotion of the union of Churches in the service of the poor, and for width of practical sympathy with the lives of the people, the Browning Settlement holds the palm among all such institutions” from “Mr. Charles Booth in opening the Browning Club, June, 1902.”

In the Walworth Road building the Settlement maintains a museum and library with memorabilia of Robert and Elizabeth Barrett Browning and various other poets. It also contains records about the Settlement's involvement in the founding of the movement which brought about the giving of the first old-age pensions in the UK. It also organises an annual service of commemoration for Robert Browning on the twelfth of December at Westminster Abbey. The museum and library are open by appointment only.

The photo shows the visit of the Duke and Duchess of York to the Settlement on 24 May 1928.  Sorry it’s so small – the picture source (link no longer working) had a 'mouse over to magnify' which showed the interesting arches more clearly.  We think it’s the Walworth Road building but it could be Browning Hall.

This section lists the memorials where the subject on this page is commemorated:
Robert Browning Settlement

Shopkeeper and philanthropist. Born Camberwell. Aged 17 he and his brother Th...

Show business charity with headquarters at The Water Rats Public House in the...