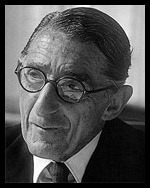 Architect. Born in Zurich, Switzerland as Reuben (but became Robin and then Richard) Seifert. Educated in London. Liked building high - Centre Point, the Natwest Tower (now Tower 42), Space House just off Kingsway and King's Reach Tower are all his, and the low-rise Faryners House. (He also built the Pirate Castle).

His Guardian obit. reads: "... he produced work that gradually evolved from neo-classic orthodoxy to an expressionistic modernism.... During 50 years in practice ... Seifert built more London buildings than Sir Christopher Wren, and undeniably had as great an effect upon the city skyline." Died  at Garden Hospital, 46 Sunny Gardens Road, Hendon.

This section lists the memorials created by the subject on this page:
Richard Seifert

The monument, created by Mark Badger, is set in raked gravel and surrounded b...

A Grade II listed building formerly known as Kings Coppice. It may have taken...

British History Online informs that a house was "built by ... Simon de Montfo...