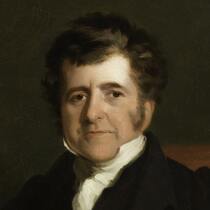 A physician specialising in kidney problems, he was credited with the discovery of Bright's Disease (now called Glomerulonephritis or Nephritis) through his research on patients who exhibited dropsy (swelling) and albuminuria (protein in the urine). This research allowed him to create a new category of disease. Our picture source gives a biography of his life.

He died, aged 69 years, on 16 December 1858 at 11 Saville Row, London, WC1 and was buried in Kensal Green Cemetery, Harrow Road, London, W10. The family grave was destroyed in a bombing raid by German aircraft in 1940, but there is a plaque to his memory in his parish church, St James's, Piccadilly, Westminster.

Probate records state that his will with a codicil was proved on 9 February 1859 and his effects were under £50,000.

This section lists the memorials where the subject on this page is commemorated:
Richard Bright

The splendid Lost Hospitals has been our source for this summary: Opened in ...