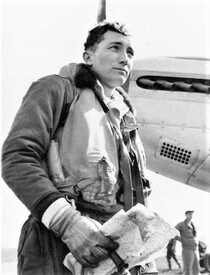 Our Picture source gives details of his military service showing that he joined the Royal Canadian Air Force where he served as Pilot Officer in No.71 (Eagle Squadron), transferred to the USAAF, became a prisoner of war and eventually retired from the USAF with the rank of Colonel in 1963.

This section lists the memorials where the subject on this page is commemorated:
Raymond Care

Illegitimate son of Nell Gwynne and Charles II.  Born at his mother's house i...