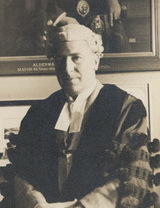 Andrew Behan has researched Austin: Robert Charles Edwin Austin LL.M was born on 31 January 1900 in Fulham, the son of Charles Edwin Austin and Mary Ann Austin née Thompson. His father was a Beer Retailer. He was baptised on 15 April 1900 at the Parish Church of St Paul's, Hammersmith and the family address was given as 6 Townmead Road, Fulham. The 1901 census shows him living with his parents at The Anchor, 6 Townmead Road, Fulham, but they had moved by the time of the 1911 census to 6 Carnwath Road, Fulham. The University of London's Students Records has an entry on their War List 1914-1918 showing him as a member of their Officers' Cadet Battalion.

He was still residing at 6 Carnwath Road when he married Kitty Belsher at St Anne's Church, Wandsworth on 7 July 1926. She was a School Teacher, living at 29 Earlsfield Road, Wandsworth and his occupation was shown as a Solicitor. Electoral registers for 1929 show them living at 119 Wimbledon Park Road, London, S.W.19 and this is confirmed with an entry in the 1931 edition of the Post Office telephone directory. Electoral registers and telephone directories from 1932 to 1934 show their address as 7 Combemartin Road, Wandsworth. They had three daughters, Kitty M. Austin, born 1928; Ann Lysbeth Austin, born 1934 and Roberta M. Austin, born 1940.

Having obtained his LL.M (Legum Magister or Master of Laws), he was appointed as the Town Clerk in Penzance, Cornwall on 20 July 1934. The 1939 England & Wales Register shows him living at Glen Trewithen, Trewithen Road, Penzance and his occupation was recorded as 'Solicitor of the Supreme Court, Town Clerk Penzance, Clerk to the L.E.A. & Joint Planning Committee, Local Fuel Overseer. A.R.P. Control'.

Electoral registers and telephone directories between May 1945 and 1964 show the family living at Lowood, Wray Common Road, Reigate, Surrey. By at least 1948 he had taken up the role as Town Clerk in the Metropolitan Borough of St Pancras.

This section lists the memorials where the subject on this page is commemorated:
R. C. E. Austin

This section lists the memorials created by the subject on this page:
R. C. E. Austin

Son of John Dudley and husband of Lady Jane Grey - see there for more informa...

First recorded in Norman times as part of the royal demesne. It had a long su...