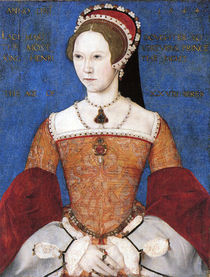 Born at Greenwich Palace. Daughter of King Henry VIII and Catherine of Aragon. When her sickly brother, the Protestant King Edward VI died in 1553, Mary was, by normal accession rules, next in line to the throne but she was Catholic. Edward and his councillors (he was only aged 15 when he died) nominated the 15-year-old Protestant Lady Jane Grey as the next monarch but this only slightly delayed Mary's accession; Grey and her husband were imprisoned and beheaded.

In July 1554 Mary married the Catholic Prince Philip of Spain. That September she showed signs of pregnancy which continued until July 1555 when the bump receded with no birth. She put this false pregnancy down as "God's punishment" for her having "tolerated heretics" in her realm. Her reign was marked by the persecution of Protestants - see the Stratford Martyrs for a description of Bloody Mary's hated activities.

Died at St James's Palace and was succeeded by her half-sister, Elizabeth I.

2017: English Heritage published a page about her, the first "official" queen of England, euphemistically describing her reign as "difficult".

This section lists the memorials where the subject on this page is commemorated:
Queen Mary I

Not to be confused with Queen Mary Tudor, who was named after her. This lady ...

Married Humphrey, uncle to the child King Henry VI.  Eleanor was implicated i...