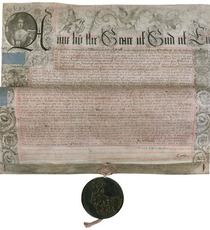 Following the Reformation the taxes on church livings, which used to be paid to the Pope, went to the Crown. In 1704, during Queen Anne's reign, a scheme was implemented that used some of these funds to augment the incomes of the poorer clergy. Trustees were appointed to manage the scheme.

Initially the Bounty used offices next to the Banqueting House but in 1734 it moved into a permanent home on the west side of Dean’s Yard (where we found the plaque) and here it remained until the merger into the Church Commissioners which operated from 1 Millbank.

The Church of England's booklet is a well-written resource for this topic.

This section lists the memorials where the subject on this page is commemorated:
Queen Anne's Bounty

From the Picture source: "In 1890 Sir Edward Guinness set up The Guinness Tru...