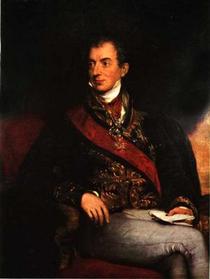 Politician and statesman. Born Prince Klemens Wenzel Nepomuk Lothar, Fürst Von Metternich-Winneburg-Beilstein in Coblenz. At the age of 28 he was Austrian Minister at Dresden, then Berlin and Paris. He concluded the Treaty of Fontainebleau in 1807 and as Austrian Foreign Minister, negotiated the marriage of Napoleon I and Marie Louise. The effects of the 1848 French revolution were felt in Vienna and he fled to England, but returned to Germany in 1851. He died in Vienna.

This section lists the memorials where the subject on this page is commemorated:
Prince Metternich

Grigory Borisovich Karasin was born on 23 August 1949 in Moscow, Russia and w...

Lord of the Manor of Hamstede in the last quarter of the 16th Century.