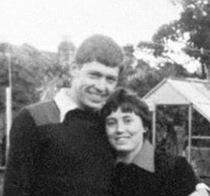 On 14 October 1978 he married Simone J. Green at St Joseph's Church, Redhill, Surrey and they lived at 7 Lodge Avenue, Waddon, Croydon, Surrey. He was attached to Chelsea police station and on 17 December 1983, whilst investigating a reported terrorist car bomb and evacuating the area outside Harrods store in Hans Crescent, Knightsbridge, the device exploded and he was killed instantly, aged 28 years. Probate was granted and his estate totalled £60,720.

The photo shows Lane with his wife.

This section lists the memorials where the subject on this page is commemorated:
Police Sergeant Noel Lane

Naval officer.  Governor of of Greenwich Hospital, 1 May 1841 until his death...

Organisation which relieves need, hardship or distress among men and women wh...