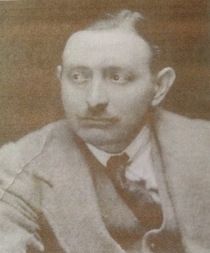 Sculptor. Born Brixton, son of the sculptor Robert Lindsey-Clark. He studied at Cheltenham and the City and Guilds School, Kensington. Served as a captain in WW1 but wounded in action receiving a DSO for conspicuous gallantry. Exhibited at the Royal Academy and the Salon des Artistes, Paris. From 1930 his work took on a more religious nature, then he entered a Carmelite order and retired to the West Country. HIs Cameronians War Memorial in Glasgow has similarities with the St Saviour's war memorial. Father of Michael Lindsey-Clark, also a sculptor.

2017: We think we've found a photo of him but it's small, and we rather want to keep our photo of the Widegate sculpture. Our correspondent, John Reed, told us that Lindsey-Clark had done the Stations of the Cross at Holy Apostles Church Pimlico. One of the photos there shows a man, probably Lindsey-Clark, working on a wall-mounted sculpture.

2018: We were contacted by Helen Lindsey-Clark who has kindly sent this photo. Good to see his face, at last. We note that she spells her and her husband’s grandfather's name with a hyphen, so we have adopted that too.

This section lists the memorials created by the subject on this page:
Philip Lindsey-Clark

Engraver and medallist.  Born Birmingham, his father Thomas also being an eng...

Born Islington as Edward Onslow Ford, but he dropped the Edward. Studied Antw...