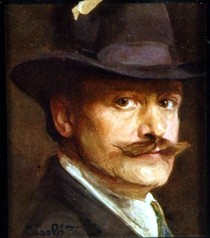 Painter. Born Budapest.  In 1907 moved to London and stayed, though he often travelled for portrait commissions which included many royal families.

His good relations with what became the enemy in WW1 led to his imprisonment in Brixton and then internment in Holloway as an enemy alien.  We have read that he was accused of signalling to a Zeppelin pilot with a cigarette lighter in Piccadilly Circus.  After 2 years he was released due to ill-health but no one of note would sit for him for another 2 years.

An extremely successful portrait painter.  Died at home in Hyme House. Youtube has film of him painting.

This section lists the memorials where the subject on this page is commemorated:
Philip de Laszlo

Erection date is approximate. Laszlo lived here with his wife and five sons, ...