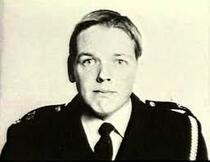 Police officer. He had been in the police force for only six months. Although off-duty he gave chase on his motorcycle to Liam Quinn, who was fleeing after being approached by other officers. Tibble attempted to block his path, but was shot twice and died, aged 21 years, later in hospital. Quinn, an American, was part of a Provisional I.R.A. group, running a bomb factory. He was eventually arrested in the U.S.A. and extradited to Britain thirteen years later. He was sentenced to life imprisonment, but was released in 1999 as part of the Good Friday Agreement. On 17 June 1976 Tibble was posthumously awarded the Queen's Police Medal for gallantry.

Andrew Behan has further researched this officer. Stephen Andrew Tibble was born on 13 August 1953 the son of Douglas Tibble b.1932 and Eunice R. Tibble née Steel b.1931 and his birth was registered in the Surrey Northern registration district. In 1973 he married Kathryn A. Stedman. He died on 26 February 1975. Probate records give his address as 2 Broadmead, Auriol Road, London, W14 and when administration was granted on 26 June 1975 his effects totalled £15,990. The address is confirmed by an entry in the 1975 London S-Z telephone directory. He was buried on 21 March 1975 in Section 21 Grave 469 in the Richmond and East Cemetery, Sheen Road, Richmond, TW10 5BJ.

This section lists the memorials where the subject on this page is commemorated:
PC Stephen Tibble

The London Salvage Corps was set up after the Tooley Street Fire of 1861. Th...