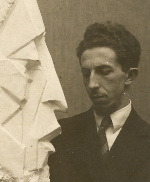 Born in what is now Croatia. Worked in Vienna and Brussels and settled in Britain in 1938. Specialised in Winston Churchill. Our picture shows Nemon with a self-portrait: now that sculpture we would like to see. There are plans for Pleasant Lands, his studios outside Oxford, to be opened to the public.

From Mapping Sculpture: "In the early 1950s, after creating a bust of Elizabeth II (now at Christchurch, Oxford) Nemon was given a studio at St James's Palace. There Nemon made numerous portraits and his sitters included (among many others): Lord Beaverbrook; General Lord Freyberg; President Eisenhower; the Queen Mother (Grocers' Hall, London); Field Marshal Viscount Montgomery (Whitehall, London); Air Marshal Lord Portal (Victoria Embankment, London) as well as a series of monumental effigies of Sir Winston Churchill."

This section lists the memorials created by the subject on this page:
Oscar Nemon

Artnet shows that a copy of this bust, by Nemon, was for sale by auction at s...

Sculptor.  We're guessing the image is a self portrait, since it graces the h...