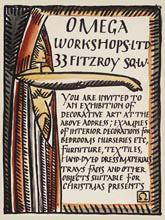 A design enterprise founded by Roger Fry and members of the Bloomsbury Group. The workshops, which included studios and showrooms were at 33 Fitzroy Square.  The aim was to remove the perceived divisions between the decorative and fine arts, and to give members an additional income opportunity. Amongst its products were painted furniture and murals, stained glass and textiles. In due course, several members fell out with Fry and left to form the Rebel Art Centre which gave rise to the Vorticist movement. Omega closed following poor financial decisions and withdrawal of patronage.

This section lists the memorials where the subject on this page is commemorated:
Omega Workshops

Painter.  Born the Netherlands.  September 1938, avoiding the Nazis, he moved...