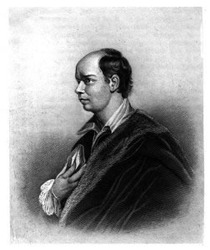 Author. Born Co. Longford, Ireland (though it could have been County Roscommon, and for his date of birth we have only his word). Arrived in London in 1760 and joined the literary group that included Samuel Johnson, Garrick, Reynolds and Boswell.

His receding chin, an attack of smallpox and general ungainliness caused him to be described as having a 'monkey face' and a 'grotesque orang-outang figure'. Johnson was also renowned for being physically less than beautiful so the two together must have been an unusual sight. Studied to be a doctor and travelled a great deal. Book: "The Vicar of Wakefield.", play: "She Stoops to Conquer". Died at home at 2 Brick Court, Middle Temple. Last words: In response to the doctor's "Is your mind at ease?", "No, it is not".

This section lists the memorials where the subject on this page is commemorated:
Oliver Goldsmith

The George The George was founded in 1723 as a coffee house, became Georges ...