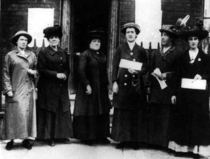 Painter, sculptor, photographer and suffragette. Born Norah Veronica Lyle-Smyth in Cheshire. She was befriended by Sylvia Pankhurst and accompanied her on a speaking tour around Europe. She financed both the East London Suffragettes' weekly publication, 'The Women's Dreadnought' and the East London Toy Factory. Died in County Donegal, Ireland. Sometimes referred to as 'Norah Smyth'.

Although a keen photographer, she seems to have been camera-shy herself, as we cannot find a picture of her. Instead we have used a photo of a suffragette deputation to 10 Downing Street in 1914, which was taken by her.

At St. Bartholomew’s Parish Church, Barrow we learn that she "carved the first Rectors’ Board and the oak panels behind the altar (although she was later a member of the socialist Second International)."

2018: Spitalfields Life have published article on Smyth with many photographs.

This section lists the memorials where the subject on this page is commemorated:
Norah Lyle-Smyth, Norah Smyth

Grew up in Antwerp and was trained by Rubens. Visited London in 1620 for a ...