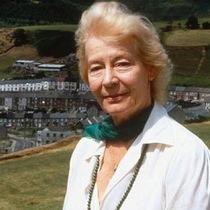 Writer of novels for adults and children, and late in life, campaigner for railway safety.

Born Nina Mary Mabey in Ilford, Essex. As a child she was evacuated during the blitz, giving her memories which informed her 1975 novel Carrie's War.  She went up to Oxford, Somerville College where she knew Margaret Roberts the future Mrs Thatcher. Married to Harry Bawden for 8 years with whom she had 2 sons. She met Austen Kark, future Head of the BBC World Service, on the top of a bus in 1953. They married and in 1979 moved to Islington. They had one daughter, Perdita.

In her life she suffered three serious blows: the suicide of her son Nicky (or Niki, depending on source) in 1981; and then the death of her husband in the 2002 Potters Bar train crash; and much later the death of her daughter.

In 2002 Nina and Austen were traveling to Cambridge together. In the crash she suffered multiple broken bones but Austen was killed. Against many expectations she survived and after much surgery returned home, able to walk. She fought against corporate might to get liability accepted and compensation paid to her and the other survivors.

Bawden died in her Islington home, pre-deceased by Perdita, by a few months.

Spitalfields Life knew Bawden personally and that article is very sensitive and informative.

Wikipedia lists 55 books, of which we've read a few and look forward to reading more.

This section lists the memorials where the subject on this page is commemorated:
Nina Bawden