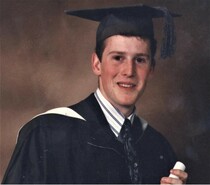 Nigel Bruce Thompson was born on 25 February 1968 in Sheffield, Yorkshire, a twin son of Norman and Pat Thompson. His twin brother was named Neal Andrew Thompson and they had an elder brother, Mark William Thompson (b.1966).

Together with his twin they attended York University and he graduated in 1990 with an economics degree.

He was a senior broker for Cantor Fitzgerald and died, aged 33 years, whilst working in their offices on Floor 105, North Tower, 1 World Trade Centre, Manhattan, New York, USA.

This section lists the memorials where the subject on this page is commemorated:
Nigel Bruce Thompson