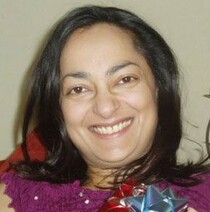 Neetu Jain was born on 23 May 1967 in New Delhi, India. Her parents, according to Find a Grave, were Ramsh and Vijay Jain. The family came to the United Kingdom the following year.

Her obituary can be found in our picture source. An IT consultant, electoral registers for 2004 and 2005 show her listed at 85 Sevington Road, London, NW4 3RU.

She was killed, aged 37 years, on 7 July 2005 whilst travelling on the upper deck of a Route 30 bus that was targeted by a suicide bomber at Tavistock Square. The narrative verdict of her death can be found on the Coroner's Inquest Report.

The Gone Too Soon Wiki page gives her date of birth as 29 April 1968 but we have used the 23 May 1967 date that is recorded in the Coroner's Inquest Report.

This section lists the memorials where the subject on this page is commemorated:
Neetu Jain

Philip Matthew Beer was born on 27 February 1983 in Barnet the youngest of th...