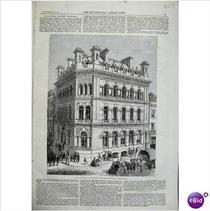 In 1835 two men, who had been successful with the Friends Provident Institution, selling life assurance only to Quakers, formed the less choosy National Provident Institution, opening for business in one room in Nicholas Lane on 30th November 1835. Moved to new offices in March 1843 at 48 Gracechurch Street. A new building was erected on the site of Nos 48, 49 and 50 and opened on 15 December 1862. Our picture shows this building in 1863. It was demolished, along with No 3 Eastcheap at the end of 1958, rebuilt and NPI returned to the site in August 1960. In 1966 NPI moved to a new head office in Tunbridge Wells.

This section lists the memorials where the subject on this page is commemorated:
National Provident Institution

The foundation stone to which this plaque refers reads "National Provident In...

There has been a market in Greenwich since the fourteenth century. The buildi...

Established sometime in the 1850s.