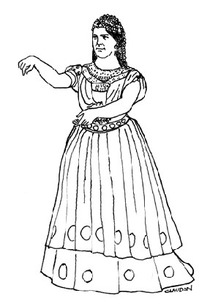 Born Edinburgh, Scotland as Isabella Gearns. Actress who adopted her mother’s maiden name of Glyn. In spite of her parents’ objections she went to Paris with her first husband Edward Wills to study acting. After being quickly widowed she returned to England and played many classical roles. The picture source website gives: "Glyn, playing Cleopatra for the first time, exhibited "a figure of voluptuous majesty, a mingling of dazzling beauty and intellectual command."
She married the wonderfully named Eneas Sweetland Dallas in 1853, but they separated shortly afterwards. She petitioned for divorce in 1874, but was sent to Holloway prison for contempt of court because she refused to produce documents relevant to the case. Died 13 Mount Street.

This section lists the memorials created by the subject on this page:
Mrs Dallas-Glyn