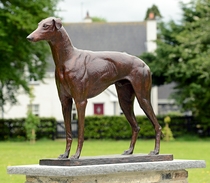 Greyhound. Born in Killeigh, Ireland. In a career of only three years, he won 61 races, (nineteen of them in a row), including two English Greyhound Derbys. His winning streak ended after suffering an injury, and he retired in 1931. He spent two years in stud and appeared in a film with Flanagan and Allen. Our picture is of a statue of him by Elizabeth O’Kane, which is located in his birthplace.

This section lists the memorials where the subject on this page is commemorated:
Mick the Miller