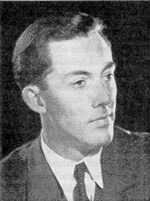 Architect and decipherer of Linear B script. While still at school he heard about the discovery of Knossos by Arthur Evans, and about the undeciphered Linear B script on the tablets. This mystery became his obsession and in June 1952 he, an amateur, managed to crack the code.

After that his architectural career held no interest, his personal life did not sustain him and he could expect no further great success in the field of philology. Aged 34 he died in a car crash on the Barnet Bypass, driving his car at high speed into a parked lorry.

This section lists the memorials where the subject on this page is commemorated:
Michael Ventris

Architects. The website of the London-based firm Carden and Godfrey gives "Ca...