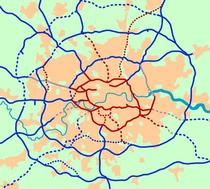 This flyover is one end of a short disconnected piece of motorway, the Westway, constructed 1964-70 to relieve congestion, back in the days when this was thought to be the solution. It was part of a master-plan involving ring roads and radial roads that would have seen the destruction of huge swathes of London. The costs and the opposition were great (LondonRemembers remembers being dragged away from the Beatles on pirate radio to help in the Archway Road campaign) and most of it was cancelled in 1973.

RBK Local Studies has some early photos 'Under the Westway'.

2017: An appreciation by Ian Visits on the 50th anniversary.

This section lists the memorials where the subject on this page is commemorated:
Marylebone Flyover

626 men of the Southern Railway who died in WW2.

A tunnel beneath the Thames with entrances at Tower Hill and at Vine Lane on ...