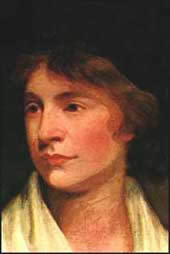 Writer, philosopher and feminist before her time. Born Primrose Street, Spitalfields. Her radical book "Vindication of the Rights of Woman" (1792) in which she described marriage as "legal prostitution" caused great controversy. She went to France to see the revolution for herself. William Blake was a friend and illustrated some of her work. She had a passionate friendship with Fuseli who was married and probably bi-sexual. Mary had a daughter, Fanny, with the American chancer, Gilbert Imlay. On behalf of his business interests she travelled in Scandinavia, taking her baby with her. She married William Godwin (shocking some of their radical friends) in March 1797 and soon afterwards, her second daughter, Mary, was born but the mother died eleven days later, at the Polygon in Somers Town. At the age of 16 this daughter was to become Mary Shelley.

Mary Wollstonecraft was buried at St. Pancras' Churchyard (where she had been married only five months before). Godwin was buried with her in 1836, but in 1851 their remains were moved to St Peter's churchyard, Bournemouth when St. Pancras' churchyard was broken up for the railroad to St. Pancras' Station. The tombstone is still there. It does not appear as a memorial on this website (since we don't generally include graves) but by virtue of five other memorials the churchyard is well covered on this website and worth a visit; either virtual (start with Burdett-Coutts) or real.

The Islington Tribune provides some explanation for the pink plaques at Newington Green: "Letters written by Ms Wollstonecraft with Jane Arden and Fanny Blood revealed passionate relationships beyond the boundaries of friendship. She also had an affair with artist Henry Fuseli and asked for a polyamorous relationship involving his wife."

This section lists the memorials created by the subject on this page:
Mary Wollstonecraft

The quotation is from Wollstonecraft's 1792 'A Vindication of the Rights of W...

It has its origins in five previously independent colleges, which were brough...