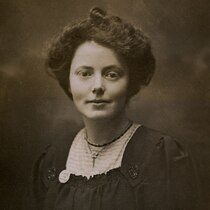 Mary Eleanor Gawthorpe was a suffragette, socialist, trade unionist and editor. Women’s Labour League then Women's Social and Political Union. Co-founder of radical newspaper The Freewoman. She was described by Rebecca West as "a merry militant saint".

Born Leeds. Emigrated to New York City in 1916 where she continued her suffrage and trade union work. We've read a biography of the extraordinary Dora Marsden (L. Garner, A brave and beautiful spirit: Dora Marsden, 1882–1960) who led The Freewoman away from any hope of popular readership, all the while supported financially and emotionally by Gawthorpe, who showed her value as a true friend.

This section lists the memorials where the subject on this page is commemorated:
Mary Gawthorpe