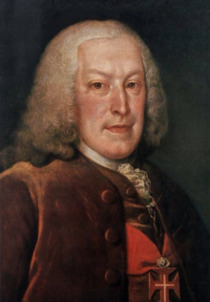 Sebastião José de Carvalho e Melo, 1st Marquis of Pombal and 1st Count of Oeiras was born in Lisbon, Portugal, on 13 May 1699.

In 1738, he received his first public appointment as the Portuguese ambassador to Great Britain, where, in 1740, he was elected a Fellow of the Royal Society and in 1745 he served as the Portuguese ambassador to Austria. He was the Secretary of State for Foreign Affairs from 2 August 1750 to 6 May 1756 under the reign of King Joseph I and Secretary of State of Internal Affairs of the Kingdom from 6 May 1756 until 4 March 1777 during which period he was responsible for the rebuilding of Lisbon after the earthquake in 1775.

He died, aged 82 years, on 8 May 1782 in Pombal, Portugal. Our picture source gives more details about this man.

This section lists the memorials where the subject on this page is commemorated:
Marquess of Pombal